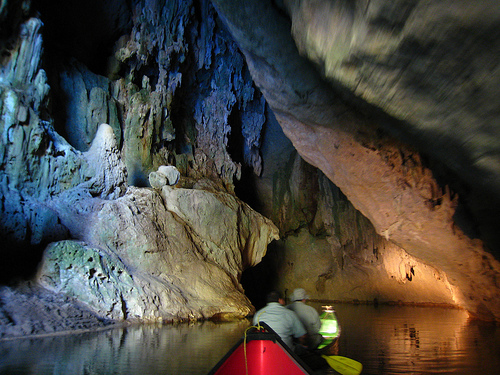 Belizes Barton Creek Cave was recently included in a list of nine of the worlds most beautiful and unusual cave destinations, highlighting an exciting new trend in tourism as an increasing number of travellers go underground seeking adventure, the Lodge at Chaa Creek reports.

You don’t need to have an interest in caving or Maya history to appreciate Barton Creek Caves, but its a pretty good bet you will by the time you leave, he said. Many visitors have told me that Barton Creek literally opened up a whole new world for them, and far from being dark and spooky, the cave itself is a beautiful example of Mother Nature’s artistry.

While little-explored subterranean landscapes are one of the final frontiers for these adventure-seekers and Indiana Jones emulators, there are a variety of caving experiences available, ranging from extreme to family-friendly for a wide range of ages.

It’s exciting, yet at the same time relaxing, canoeing through large underground chambers with the guides using spotlights to point out spectacular formations and ceremonial areas and objects. “We’ve had grandparents and young children come along, and everyone has a great time” he said.

The popular Lonely Planet Guidebook also gave Barton Creek Caves a thumbs up, describing its outpost on their website as one of the Top five highlights of Belize.

Over four and a half miles long with a meandering river flowing through its chambers and wide passages, Barton Creek Cave has become a popular tourist attraction in recent years with high standards of safety and environmental protection. Mr Awe said that the guides Chaa Creek uses are all licensed and highly trained in natural history and Maya heritage, making a Barton Creek Cave tour both an educational and enjoyable experience.

Exploring these beautiful Maya ceremonial caves was once a pretty specialized activity, but in recent years the Barton Creek and other cave tours have become more popular as people discover just how spectacular these underground treasures are. “Its great that they are now acknowledged as among a handful of the best in the world, and I think its going to open up a whole new natural and cultural aspect of Belize to a lot of people” Mr. Awe said.