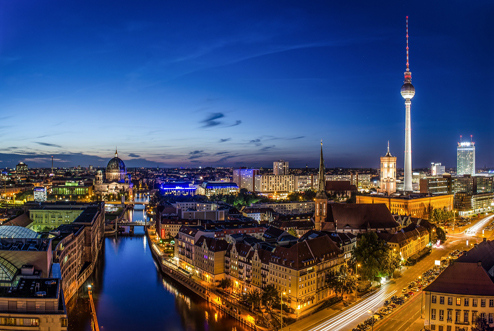 For decades, these treasures were under Soviet control and off limits to visitors from the West.

The spotlight will be on Berlin for much of 2014, which not only marks the 25th anniversary of the fall of the Wall on November 9 but also 20 years since Allied troops left the city, 49 years after the end of the Second World War.
A year of cultural events will mark the reunification, including cycle tours along the Wall path, visits to former watchtowers, East Berlin tours in a Trabant car and an exhibition by the artist Yadegar Asisi’s. On the weekend of November 8 and 9, a Berlin Wall will be fashioned from thousands of white balloons.
Viking River Cruises (vikingrivercruises.co.uk) includes a night here at the end of a seven-night Elbe cruise from Melnik in the Czech Republic to Magdeburg (from £1,745 departing November 1), but it makes sense to add another night or two. Try the Hotel Bikini Berlin (designhotels.com), which opens in January 2014, or the Steigenberger Hotel am Kanzleramt (en.steigenberger.com/Berlin), opening in May with views of the Reichstag. Riviera Travel (rivieratravel.co.uk) has eight-day Elbe cruises, also with a day in the city, from £1,499 departing in October.
Discover the natural beauty of former East Germanys dramatic landscape on an Elbe River cruise. Tour the opulent palaces of Saxon monarchs and stroll through beautifully landscaped gardens; sail between the dramatic sandstone cliffs of Germanys Saxon Switzerland. Marvel at the baroque splendor of Dresden and see how Meissenware porcelain is produced. Walk in the footsteps of Martin Luther in historic Wittenberg and learn about the Protestant Reformation. Your journey is bookended by one night in multicultural Berlin and one night in graceful Prague. An elegant experience indeed.