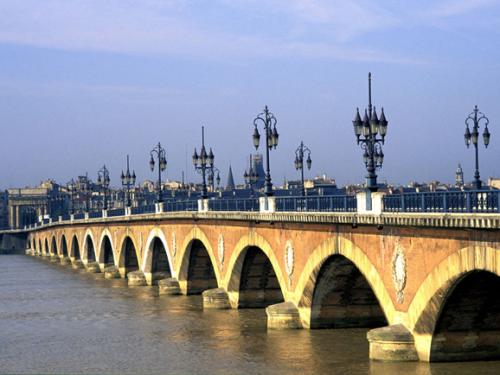 Bordeaux is a port city on the Garonne River and it is also the capital of the Aquitaine Region. Bordeaux has been classified as a ”City of Art and History.”
It is home to 362 historic monuments with some that date back to Roman times. Only Paris has more.
Famous landmarks that you have to see while holidaying in Bordeaux are the Church of Notre Dame and the Grand Theatre de Bordeaux.

Bordeaux is the world’s main wine industry capital. Although great white wines are produced and made in Bordeaux, the region is particularly renowned for its reds.

Like a classic wine, Bordeaux took a while to come into its own. A renewal programme instigated by mayor Alain Juppé in the 1990s has transformed Bordeaux from a congested and claustrophobic place into a bright, modern city. Neo-classical facades have had a steam clean, sleek trams snake through the boulevards and the once desolate riverfront has been redeveloped.

The latest splash of colour comes in the form of a fleet of Philippe Starck-designed scooter-bikes, being tested for a cycle share scheme. Starck is also behind the new Mama Shelter, (doubles from €59) a budget hotel that opened in the former HQ of France’s national gas company last October.

In the northern docklands, old warehouses are being recast. Les Tontons (from €10 for two courses) in the cavernous former dock offices serves up to 500 people, giving a chic take on canteen-style food.
Just over the Bacalan Bridge is Le Garage Modern, car repair shop by day and performance venue by night.