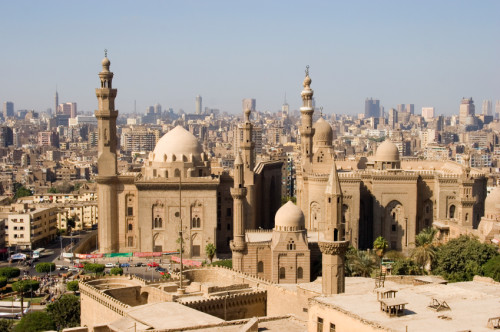 Cairo is a world metropolis and tantamount to being an open-air museum. The Nile divides it in two and the centre of the city contains modern shops and office buildings in close proximity to medieval churches and ancient mosques.

The Khan el-Khalili bazaar is like something from a bygone age and where the Orient combines with the Middle Ages, ‘A Thousand And One Nights’ amid Islamic Cairo. Goods inspired by pharaohs Tutankhamen and Nefertiti are in constant demand and it’s where haggling is the norm. The bazaar is a colourful place with smoking hookahs, exotic carpets and musical instruments as well as a huge array of herbs and spices.

Abu Serga is the city’s oldest church and dates back to Fatima times. It was built on the ruins of an even older church in the Coptic district of Cairo. The three-aisled basilica was founded by Roman Christians at the end of the 4th century.

Built in 1902, the Egyptian Museum’s 150,000 exhibits amount to being one of the greatest historical collections in the world. When both the Greek and Roman civilizations had reached the zenith of their power, Egypt already had a history that dated back almost 3,000 years.

In 1830, King Mohammed Ali had a mosque built and named it after himself but it is now more commonly known as the Alabaster Mosque. It was 18 years in construction and was built on the site of a former Mamluk Palace.

Egypt and its capital of Cairo is the oldest cultural land on Earth. A country that impresses with both its 5,000 years of history and lively modern spirit.