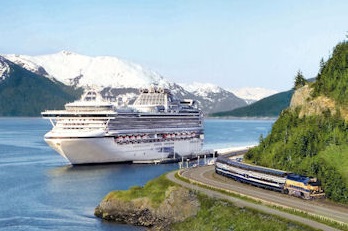 A rail and river cruise is the perfect way to take a holiday, allowing you to sit back and relax as you pass effortlessly through different countries,drifting by spectacular scenery and stopping at quaint towns and historical cities along the way.

Norwich-based specialty travel company Holidays By Rail grows its North American product line with the addition of five new rail-cruise holidays across the USA and Canada, bringing the number of land and sea combination trips offered by the company to more than 30.
Rail-cruise holidays marry two unique yet complementary travel components to create a best of both worlds holiday, said Eric Hutchins, general manager of Holidays By Rail. These new rail-sail packages expand a travellers holiday possibilities to destinations like Mexico and the Caribbean in addition to supplementing our offerings in Alaska.

In Canada, the new 16-day Rocky Mountaineer & Alaska by Land and Sea holidays pairs a scenic all-daylight rail journey through the Canadian Rockies aboard the renowned Rocky Mountaineer with a comprehensive city stay in Vancouver, 7-day cruise through Alaskas Inside Passage, and touring in Denali National Park and Fairbanks. This dual-country itinerary departs 21 May, 18 June, 16 July, and 13 and 27 August 2013 and starts at starts at £2147 land-only, per person based on double occupancy plus port taxes.

In the USA, travellers can select from four new itineraries:

Holidays By Rail’s collection of rail-cruise holidays pair a holiday at sea with a comprehensive land package by rail.

To view all of Holidays By Rail’s rail-cruise packages as well as the company’s extensive product line including rail tours throughout the USA, Canada, Europe and beyond and tailor-made getaways, visit http://www.holidaysbyrail.com.