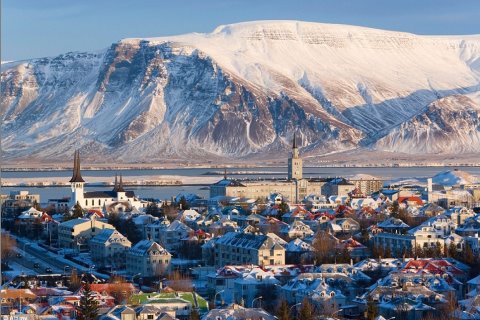 Think of Iceland and there are several familiar associations: hip Reykjavík, the beautiful therapeutic Blue Lagoon, or perhaps their musical exports Björk or Sigur Rós.
But this land of boiling mud pools, spurting geysers, glaciers and waterfalls is also an adventure playground. Its breathtaking landscape is an inspiration to artists and photographers.

Iceland is the least densely populated country in Europe, with a pure, unpolluted and truly magical landscape. Iceland’s summers are surprisingly warm, lush and green, with days lengthening until midsummer, when the sun dips down to the horizon but never sets. During winter you can marvel at the amazing, undulating green, blue, yellow and pink lights of the aurora in the night sky, and the winters are not as cold as you might imagine. Regardless of when you visit, you can be assured of the warmth of the Icelanders’ welcome and their desire to share their culture and make every effort to ensure that your stay is a pleasant one.

Iceland is gaining credibility as the “Hollywood of the North” after several blockbusters were shot there, including Oblivion, Prometheus and The Secret Life of Walter Mitty. Two of this year’s anticipated hits were also shot amid the lava fields and glaciers: Interstellar, Christopher Nolan’s sci-fi movie, and Darren Aronofsky’s Noah.

This video shows you some of Road No. 1 on Iceland – Breidalsheidi pass between Egilsstadir and Djupivogur

Tick off the locations on a road trip along the spectacular 832-mile “route one” ring-road (from £690pp with discover-the-world.co.uk). The first hotel in the new Stractachain opens in May near Hella in south Iceland, with doubles from £86.Wow Air flies from Gatwick to Reykjavik from £138 return