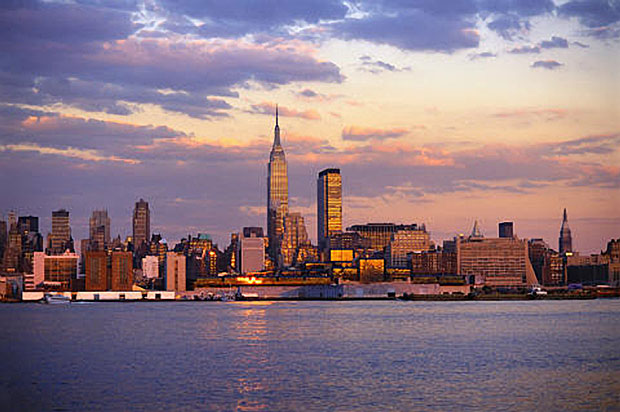 New York is capital city of the American Dream, with its population drawn from each corner of the world.

The Empire State Building is a symbol of the glamour and fascination of this frenetic city, yet the Chrysler building is just as imposing, its unusual tower being decorated with car motifs such as bonnets, hub caps and car wheels of the 1930s.

Wall Street derived its name from a wall which had been erected to protect the emerging town from attack by Native American Indians and now, most of the city is an open powerhouse of ceaseless activity with a constant mêlée of car horns, sirens, and screeching tires.

Greenwich Village is one of the few areas of the city that has no clearly-defined symmetry. Attractive steps grace many of its 19th century houses of red brick and brown sandstone and until the 1960s, many important artists and authors lived there, such as Edgar Allen Poe and Henry James.

Little Italy, Chinatown, The Brooklyn Bridge, Central Park, Ellis Island, The Statue of Liberty, Broadway, Times Square – each has its own colorful stories to tell amid the fantastic man-made Manhattan glass horizons, the skyscrapers which shamelessly reach up to the heavens and exclaim that New York is most assuredly the commercial capital of the universe.