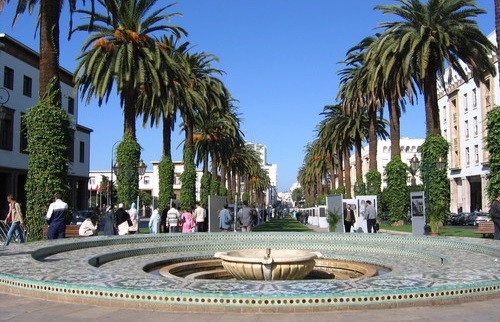 Ask people to name a Moroccan city and most will say Marrakech or Fes, or even Casablanca. Rabat – the country’s capital – will probably be a long way down the list. Which is a shame, because it certainly has its draws, including a historic medina, plenty of souks, and a French-colonial “new town”, one of the most ambitious 20th-century urban projects in Africa. Many visitors say they find it less chaotic than Marrakech.

Rabat is the capital of Morocco and also its royal seat of power. The main residence of King Mohammed the Sixth is a fascinating modern metropolis. Along with its monumental works of art, it is the fourth oldest of the Makhzen cities, is also one of Morocco’s most important.

Cafés and workshops reflect daily life and most of the city’s souks are divided into specialized areas with items such as leather goods, blankets and carpets for sale and with a little haggling, it’s possible to purchase quality handicrafts at a very modest price!

The Kasbah des Udayas was built by Yaqub al-Mansur in the 12th century. It is located at Rabat’s most elevated point and is like a village within the city. The eight metre high wall once protected the Kasbah and its inhabitants. The fortress is inhabited to the present day.

Barred windows create an Andalusian ambience. The Kasbah is one of the most popular though most expensive addresses in Rabat.

Throughout the centuries, the Moroccan coast was dominated by pirates but the might of European colonialists put an end to their dubious activities.

The mausoleum of Mohammed V was built in 1967 and the tomb complex contains a mosque, a mausoleum and a small memorial that contains images of the king.

At the end of the 12th century, Yaqub al-Mansur constructed the largest mosque in the Maghreb. At a height of 60 metres, its minaret was taller than any other in North Africa. Four hundred columns support the prayer room and it has 14 gates.

Rabat is a fascinating capital city and royal residence – an exotic world that lies between both occident and orient. Rabat was given Unesco world heritage status in 2012 and the city could be on the brink of experiencing the Ryanair effect, as new flights link it to Stansted from February.