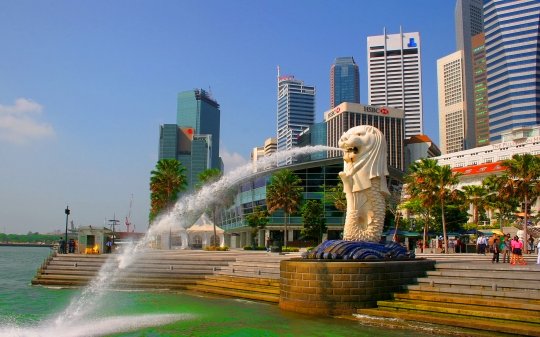 Singapore is a city-state island situated in South East Asia, just off the southern tip of Malaysia.
Bustling Pagoda Street Market sells novel gifts such as dragon candles. Little India crams the colours and scents of the Indian subcontinent into a a few city blocks. Kampong Glam, Orchard Road and Bugis Markets are home to retail and bargain hunting.

Marina Bay and Gardens by the Bay are two examples of Singapore’s incredible ability to innovate.

The Buddha Tooth Relic Temple offers escape from the city center, as do the Singapore Botanic Gardens and National Orchid Garden, and the Bukit Timah Nature Reserve. Singapore Zoo and Jurong Bird Park are perennial attractions.

A cable-car goes to to the island playground of Sentosa. At Sentosa’s western tip is the historic Fort Siloso.

East Coast Park is lined with bike paths. From Changi Beach ‘bumboats’ head to the secluded mangroves of Pulau Ubin.

Boat and Clarke Quays are Singapore’s nightlife hotspots. Adventurers and writers have drank at the bars in Raffles Hotel.