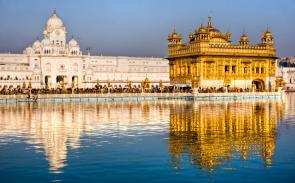 The Golden Temple is one of the most stunning sites in India. Few places combine amazing surroundings with a calm and peaceful atmosphere better than the Golden Temple.

The Golden Temple is surrounded by a large man-made lake — a lake which is closely linked to the temple and the surrounding city. In 1573 the construction of the lake started under supervision of the fourth guru of Sikhism; Guru Ram Das Ji. The lake stood complete four years later, in 1577. During this time, a city began to grow around the lake. The name of the city was originally “Ramdaspur” – after the guru – but it was later changed. As the city became associated with the construction of the lake, the city simply took the same name as the lake itself. Therefore, both the city and the lake carry the name Amritsar.
For more info on the Golden Temple, India, visit: www.worldsiteguides.com