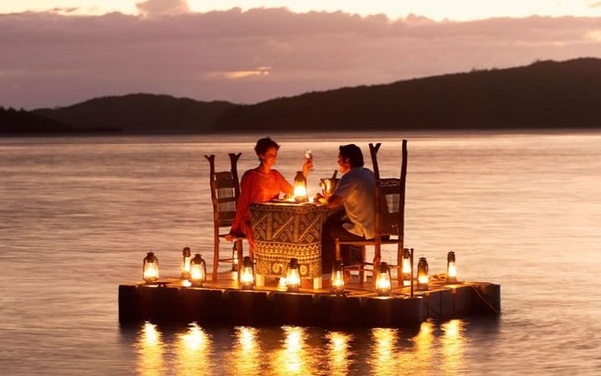 Turtle Island, Fiji’s pride and one of the most popular tourist attractions of this island nation and is one of Fiji’s most exclusive and luxurious island resorts.
Part of the Yasawa Group of islands in the Republic of Fiji, Turtle Island is a string of ancient volcanic lagoons and jagged outcrops that were born out of violent eruptions.

They are now a peaceful paradise of lush greenery, fragrant flowers, and the world’s most exquisite beaches. (It’s no wonder they chose to film “The Blue Lagoon” here. After all, this is where the actual Blue Lagoon is.)

This island is a 500 acre tropical haven that was transformed into a resort by Richard Evanson. Mr Evanson bought the island back in 1972 when it was still called Nanuya Levu. At first Evanson just wanted an island all to his own so that he could relax and rejuvenate his tired soul that was caused by his stressful work when he was still living in the United States. In the late 70s, a Hollywood producer sought out an island in the tropics to shoot his film and he ended up renting Evanson’s island. It was on Turtle Island that the movie “Blue Lagoon”, was shot and Evanson was so grateful to have other people stay on the island without disturbing the lush greenery that he decided to turn his whole property into a resort. From then on, Turtle Island became a haven for couples who want to escape from the hectic world of cities.

In here, couples can enjoy their privacy and have a beach all to their own and stay in traditional bures which the Fijians are used to living in. Of course, guests are provided with some modern-day comfort such as air-conditioning and luxurious bathtubs.With only 14 cabins (“bures”) available, and a maximum of 28 guests on the island at once, Turtle Island provides a respite from the rest of the world. Private beaches, pristine waters, incredible sea life, secluded accommodations, and a plethora of activities to choose from, this may be the post peaceful place on the planet.
Romantic, intimate, all-inclusive, luxurious, and friendly — Turtle Island is a world entirely beyond time and obligations. For adventurous island wanderers looking for a private paradise, this is the vacation of a lifetime.