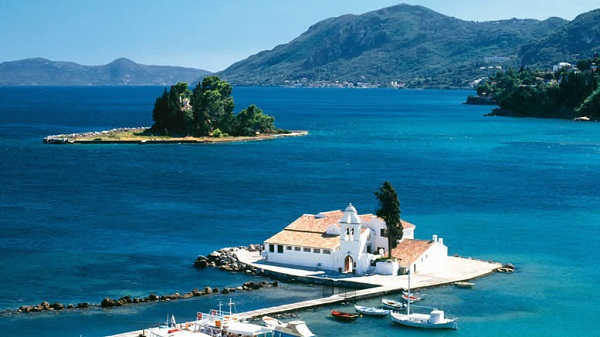 Shepherd Entertainment gives you the history of Corfu and takes you on a tour of the city’s sites and attractions. Its visitors can enjoy the Halikiopoulos Lagoon, St. Mark fortress and the famous Vlacherna Monastery, which is the symbol of the Island.
A castle of stones and earthworks stood in the place of the old fortress around the 5th century.

It was fortified by the Byzantines who established their capital here as a protection from the attacks of the Vandals, the Goths and the Slavs. In the court, the Doric style pillared garrison church was built. The residential buildings were connected by an underground labyrinth. The walls on the seaside were made higher. In the 18th century, the buildings were surrounded by a wide water jump which is used as a port nowadays. A drawbridge spans the channel. From the esplanade, we can reach the castle using this bridge. The dungeons, the knights’ rooms and the towers of the building surmounting the cliff are reminiscent of the fortress that was once impregnable even by the Turkish. The museum and the lapidary tell tales of old ages. Of course, we can’t only see Byzantine mosaics but also frescoes and reliefs as reminiscences of the 400 years of Venetian rule.

The lighthouse still helps the orientation of ships and the castle chapel is also in operation. The far side of the 5km promenade is occupied by the Kanoni Peninsula. The area between the two ports was the city of the ancient Kerkyra, the excavation of which has not yet been finished completely. The summer residency of the English governors was built on the nice little peninsula covered by rich vegetation. This is where Austrian Queen Elizabeth stayed when she was looking for a place to build her castle and this is where Philip, Duke of Edinburg was born who became the husband of Queen Elizabeth of England.
The Halikiopoulos Lagoon can be found between the capital and Perama. The runway of the airport of Corfu was built on its bank. Here can be found the symbol of the island, the Vlacherna Monastery standing on a peninsula with the Pontikonissi or Mouse Island behind. Its white stairs among evergreens lead up to a small nunnery. Vlacherna and its surroundings is the most visited and photographed site on Corfu. The white washed belfry church can be accessed by a foot bridge. Thousands of visitors come to this place on a pilgrimage which is gripping in its simplicity. From the café with terrace on the top of the steep green hill, there’s a magnificent view of the monastery and the every changing colors of the sea.
The new fortress was built by the Venetians who gave it the obvious name St. Mark. The lion with wings can still be seen over the gate. Today, the base of the Greek navy can be found here. However, in the port, there are hardly any naval vessels. There are more ferries bringing tourists and cars from Bari Italy. By hydrofoil, the travel time can be reduced by 2/3. But travelling this way on a rolling sea is more like an extreme sport. The Byzantine museum can be found in the scenic Capielo district. It was established in the Panagia AntivouniotissaChurch built in the 15th century. Here, paintings and icons by famous artists such as Lombardos or Damascinos are exhibited. From the terrace of the marjia, we can view the Venetian port which is called Mandraki like in Cos and Rhodos. Instead of Venetian galleons, today, tourist ships gather here.